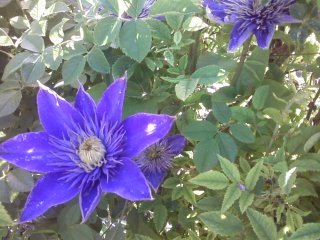 Missing the sight of flowers in the garden has me flipping through photos tonight. I'm staving off the annual winter depression by remembering what the next two seasons have in store. This beautiful blue Clematis cheers me each time I enter the secret garden during the late spring and early summer.  Its delicate little tendrils twine through climbing rose canes and the indigo color contrasts beautifully with the antique rose's sweet smelling, double-flowering, deep pink petals.

Clematis perform well in Oklahoma's USDA hardiness zones 6 and 7. Bursting with color that catches your eye and tempts you to search for buds hidden among the roses and foliage. Clematis climbers fall into one of three categories. Each with individual pruning needs to promote healthy growth and enhance flower production. When planting Clematis, check with your nursery as to what pruning requirements your Clematis needs.

Remember they adore the sun, but need their roots shaded by smaller plants or additional mulch to help keep their shallow root system cool. Clematis will add a mystical and theatrical touch to your garden with a flare relegated to the dainty, but flamboyant.

It makes me wonder what gardeners did before photographs existed? Suffer excruciating garden withdrawals, probably!
Posted by Betsy Randolph at 11:04 PM No comments:

Don't be so haughty, sister!

Sitting in a class room full of macho men for eight long hours had worn on my nerves. Minding my manners all day; I had endured foul language and graphic details of unspeakable crimes. There were times during the day that I felt queasy and filthy because of the topic being taught, but I was cautious in my speech; quiet and humble in mannerisms. Wearing a OHP trooper uniform changes ones' image of ones' self and I suppose it changes how others see you also. So after stomaching all I could, I stood and stretched my stiff legs and gathered my few belongings. Feeling justified in my intense dislike at the pin-headed instructor and his crudeness, I made my way to the trash can where I would throw my Styrofoam coffee cup away. It had entertained me all day as I doodled on its squishy surface. Mentally listing my qualifications, I told myself that as an instructor I would never talk like this man chose to do, I would not offend or rape students' ear holes like this man had done. This man is inferior to me, I thought as I dusted off the hairspray flecks that had collected on the shoulders of my brown shirt. I adjusted my gun belt and threw my head back as if I were an aristocrat at a grand ball. I swept across the carpeted classroom floor with class and ease and just as I approached the receptacle bin of refuse, I sneezed with such force that I peed my taupe trousers. Fear and panic slapped me silly as I quickly spun around to see if anyone had taken note of my plight. No one seemed to notice the source of my unease, so I lowered my notebook in front of me and used it as a shield as I backed slowly out of the classroom. One thing continued to blast away at my self confidence as I squished across the parking lot at a quick trot...judge not! When was I ever going to learn?
Posted by Betsy Randolph at 8:36 PM 2 comments:

His black eyes darted around the crowded room nervously as he paced behind the podium. He wiped his hands on his trousers as if they were wet. There was only two of us on the panel that night, he spoke first.
"My name's Harold." He began, his voice wobbled a bit as he told the crowd about himself.
"I sat where you are sitting, not 5 or 6 years ago." Harold said. "Nothing that was said here that night, affected me. I left here, just as I had come in. I liked to drink and when I would drink, I would drive." He said unapologetically.
I watched him intently, not knowing where he was going with his story. His black plaid fedora was cocked to the left on his head not revealing any hair underneath. I was thinking how he looked like a leprechaun with a scraggy black beard and short stature. Harold probably wasn't 5' tall and wore tattoos like jewelry on each finger. Taking long pauses between sentences to collect his thoughts, he plunged his hands into his baggy jean pockets and hunched his shoulders forward as if he were cold. I thought he looked a bit rough around the edges, but almost childlike in his demeanor.
He told us that he was and is a chronic alcoholic. He said he had been arrested four times for driving under the influence of alcohol and said he even did time for the last one.
"I was locked up for a year and a half." He confessed, but never took his eyes from the audience.
He told us all about the high cost of those D.U.I.'s, saying they cost him nearly $60,000 dollars, his house, his job and his family.
"Then one day, I stopped drinking." Harold bragged, "I attended A.A. and got sober."
His candor made him likable, I found myself drawn to his plight and reveling alongside him in his victory. He held everyone's attention, I noticed, as I took a quick look around at the attendees. My eyes drifted back to Harold's as he continued.
"After all the things I had done, I finally got my life on track, I was sober. Then my son was killed by a drunk driver. He was only 16."
His eyes flooded with tears. I could see that there was a great deal of anger and grief very near the surface as he gritted his teeth. Harold had escaped from killing anyone when he chose to drink and drive, but someone had stolen his boy while choosing the same path he did. The impact of which was almost more than he could bear, but that's why we were there; we were the victim's impact panel.
I don't know if Harold's story or mine made any difference to the people that attended that V.I.P. but as usual, I came away different; moved to act, to do more and to never forget the victims of D.U.I.
Posted by Betsy Randolph at 1:33 PM No comments: